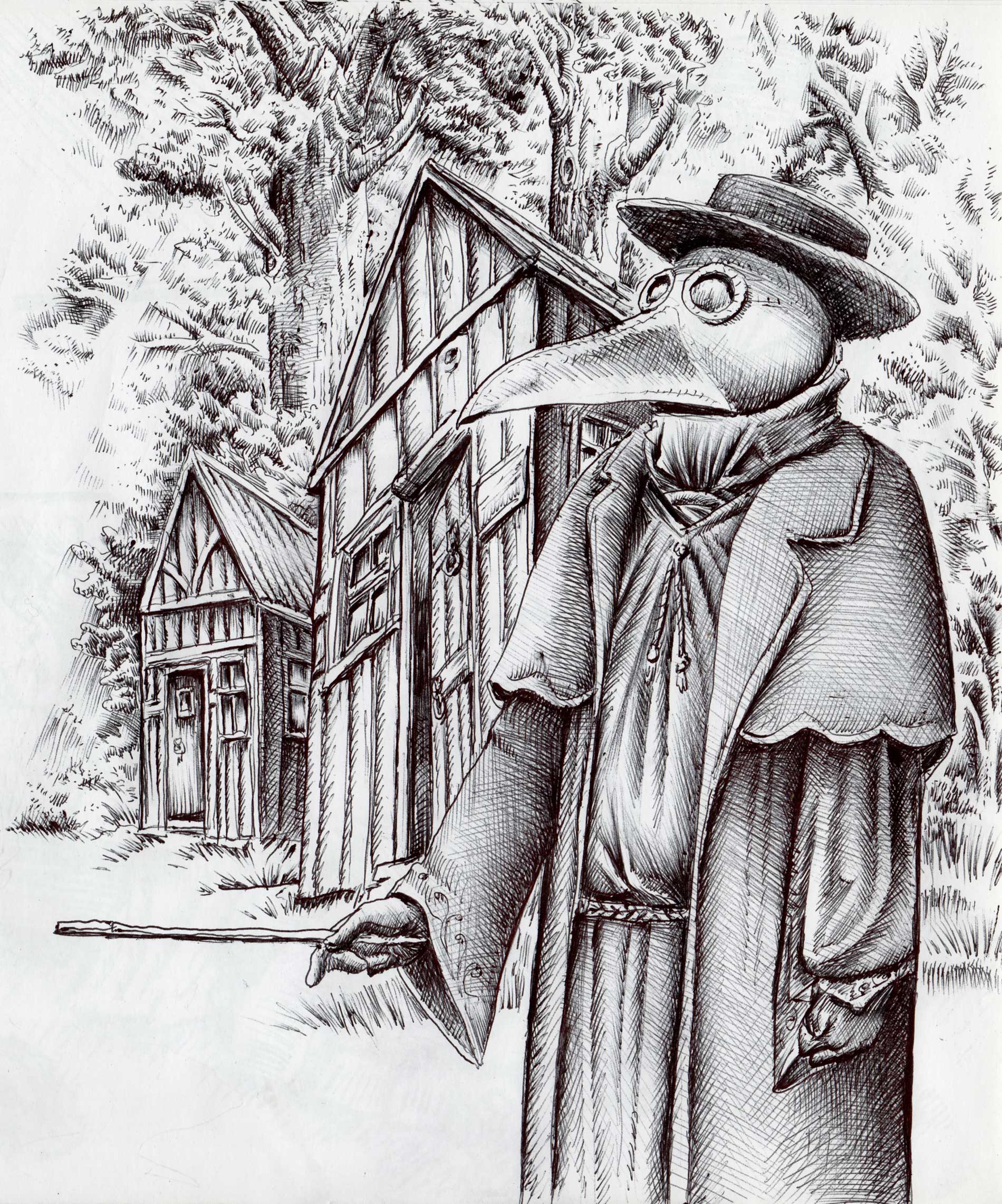 The garments were invented by Charles de L’Orme in 1619. First used in Paris but later spread to be used throughout of Europe, the Plague Doctors costume was the most powerful symbol of the Black Death and if one was coming to see you it would be a sign of your own impending death. The Plague Doctor was a medical physician who treated those who had the plague.  In times of epidemics towns would hire them if they had many plague victims, the fact that the town had paid would allow the Plague Doctors to see to the rich and the poor.

Some Plague Doctors were con artists as they would charge families extra for fake cures and promise special treatments, these charlatans were not normally professionally trained or experienced. They would be second rate doctors unable to find success in the field themselves or young physicians trying to establish themselves.

The protective suit modelled after a soldier’s armour had a heavy fabric overcoat that was waxed, a beak like cone nose to hold scented substances and straw, a mask with glass eye openings. Made of a canvas the outer garments were coated in wax, as well as waxed leather pants, gloves, boots and hat, the costume was nightmarish from the neck up. The mask and dark leather hood were held onto the face with leather bands and gathered tightly at the neck so as to not let in any noxious, plague-causing miasmas that would potentially kill the bearer. Eye holes were cut into the leather and then fitted with glass domes.  The straw that was placed in the beak like cone was believed to filter the “bad air” and the wooden cane that they carried was to examine the patient without actually having to touch them, used to lift bed sheets take the patients pulse or clothes and even used for repenting sins as most people had believed that the plague was a punishment and they would ask to be whipped to repent for their sins. The aromas from the beak could have been camphor, floral concoctions, mint, cloves, myrrh and basically anything that smelled nice and strong. In some French versions of the costume compounds were actually set to smoulder from the beak like cone.

Their principle task was to treat and help cure plague victims and even though some really did try most did a more actuarial job than medical, they kept track of the number of casualties and recorded the deaths in log books. They would assist or conduct autopsies themselves to determine what role the plague played which were otherwise generally forbidden in Medieval Europe. Plague doctors also gave advice to their patients about their conduct before death and they were held in high regard and sometimes even kidnapped for ransom.

Pope Clement VI hired several extra plague doctors during the Black Death plague. They were to attend to the sick people of Avignon. Of eighteen doctors in Venice, only one was left by 1348: five had died of the plague, and twelve were missing and may have fled. The method that Plague Doctors used varied but Plague doctors practiced bloodletting and other remedies such as putting frogs or leeches on the buboes to “rebalance the humors” as a normal routine.

The Plague Doctor is frightful and to think how afraid people must have been when they would come to their homes. How would you feel if you had taken ill and he was standing at your front door ready to examine you?