Diego rode carefully down the windy wet road as his headlight began to flicker. Within a matter of moments, the light cut out, leaving Diego in utter darkness. He slowed down a little, but forged on regardless.

“Christian!” he shouted out, as he thought he saw someone ahead.  But there was no one there. Suddenly Diego came to an abrupt halt; something was laying in the road ahead of him. His moped was still running as he tapped on the headlight, it flickered on and off frantically as he tried to see what lay before him. It looked like a person but he wasn’t sure. Diego kicked the stand down on the moped, balancing it as he climbed off. He could hear the rain hitting his headlight as he slowly approached what he thought was his friend.

“Christian?” he whispered, edging closer to what lay in the darkness.

He slowly took his helmet off, holding it in his right hand. He noticed that whatever was laying ahead began to move slightly. Diego’s heart began to race as he heard a slight groan.

He was a couple of feet away when the moped’s headlight began to flash again. He turned his head looking at the moped and then focused back in front of him. As the headlight flashed on and off, Diego could see what looked like a woman with long black hair laying in the muddy road, her arms were bruised badly. As he got closer the moped’s light cut out once more.

Diego heard something dragging on the road as he stood enveloped in blackness. He opened his jacket and pulled out his phone.  His hands were trembling as he turned on the flash and focused the light in front of him. His breathing became shallow when he discovered the woman was gone. Diego turned around to run to his moped but he was shaking so much that he dropped his phone into the mud.

He bent down to pick it up and at that moment he could feel someone or something watching him. When he turned his phone over the flash revealed something terrifying before him. Diego shouted out as he slipped backwards landing on his haunches on the ground.

In front of him crawled a woman. She used her hands to pull her body towards him. She dragged herself up to Diego as he tried to stand up but he slipped once again in the mud. His phone’s flash gave off just enough light for him to see that her long white hospital gown was soaked in blood.  Her face was covered with her wet hair. 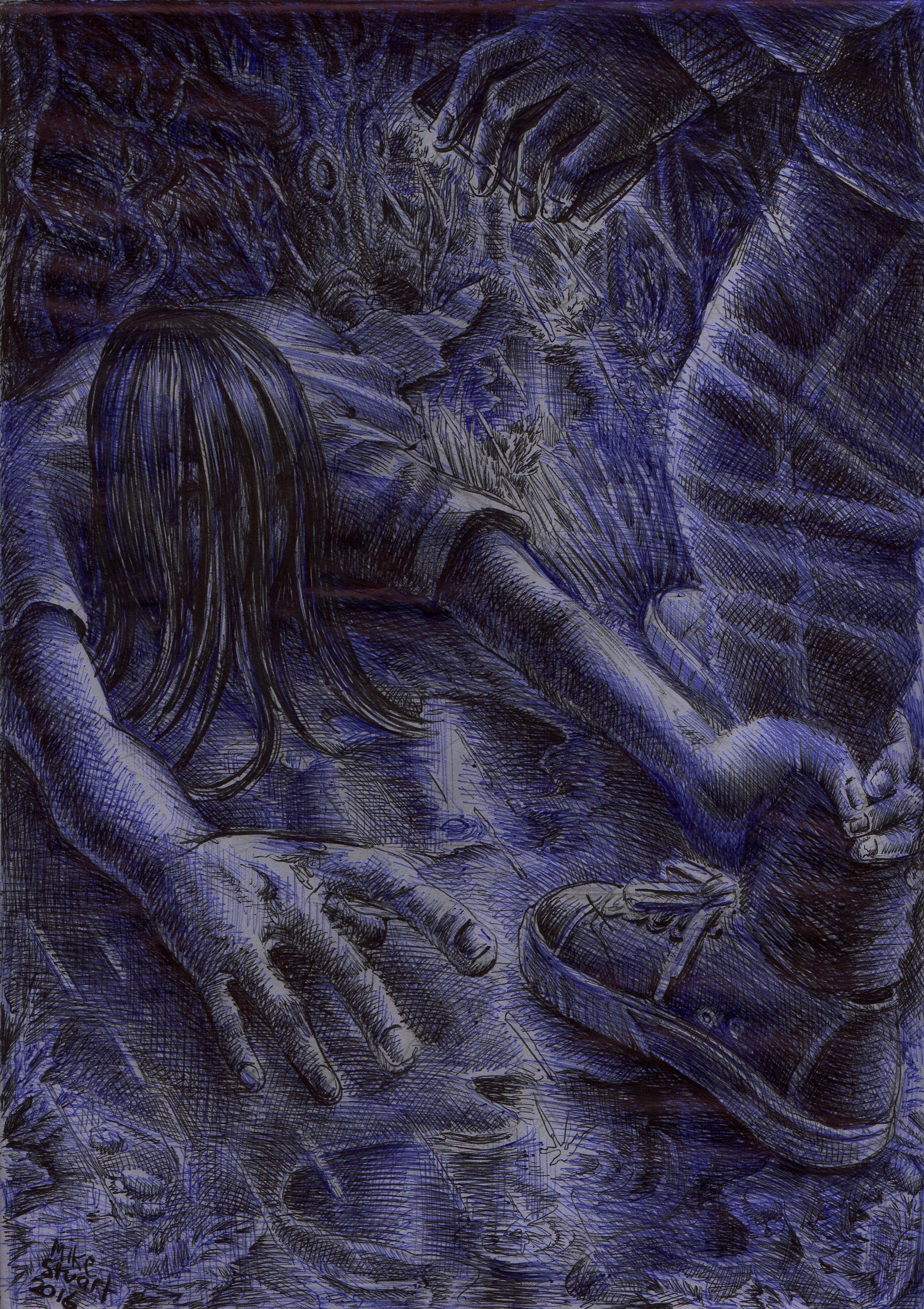 Fear consumed him as her eyes glared back at him through the darkness.  The faint light from his phone left Diego feeling confused and disorientated.  He gasped as he felt her hands frantically grabbing at his legs. She was making a muffled sound and when she turned her head towards the light which was cast onto her face, Diego noticed that her mouth was sewn closed.  It was sewn in a terrifying way. It was an abomination; a smiley face created entirely with stitches.  Her skin had been folded and pleated just as a seamstress would do with a tailor-made garment.

Diego managed to push her backwards, but he barely made it to his feet before she grabbed his legs and tried to pull him back down.  Mud splashed over his phone blocking the flashlight, but he kicked, blindly and repeatedly, trying to escape. Light flickered from his phone and he held it tightly before he felt her grip on his calf muscles.  The strength in her arms was incredible and she yanked him back down to the ground. Diego screamed out as the woman grabbed onto his jacket.  He lifted his arms to protect his face as her rough hands grasped at his mouth. She hit the phone out of his hand and tried to muffle his screams.