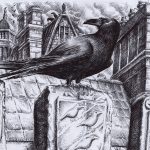 Someone asked me today, why are there so many ravens on the island? Is there a special meaning for the raven? If you look up the description of the raven it is simply a large heavily built crow with mainly black plumage, feeding chiefly on carrion. But if you delve a little deeper into the more spiritual or occult side of things the raven is so much more than just a bird….

In Greek mythology ravens are associated with Apollo, the god of prophecy. Depicted as an oracular bird bringing messages from the other side,  typically associated with the supernatural realms lying beyond the ordinary experience. A Greco-Roman legend says ravens were once all white but because they could not keep secrets Apollo punished them by scorching their beautiful white feathers black.

In Christian lore Noah sent out a raven first to confirm the decreasing floodwater, but when it never returned it is said that God turned its feathers black for its failure. In ancient times pagan legends resulted in the demonization of crows and ravens, which were consequently depicted as familiars of witches. The raven is depicted as an ill omen before a battle or war.

In Native tribes the raven is depicted as a cunning trickster but also as a sage. In Native American tribes the raven is the bearer of magic. Other Native North American tribes saw the raven as the bringer of light. When there were rituals for clarity, ravens would be called although most considered them tricksters because of their transforming/changing attributes. The raven is often heard to cackle utterances that sound like “cras, cras.” The actual word cras is tomorrow in Latin.

In Norse mythology the God Odin depended on two ravens as they flew all over the world and brought  back information to him, he had many daughters known as Valkyries who could transform into ravens. In Africa the raven is considered a guide, in China and Japan it is a symbol of the sun. Some cultures believe that a raven is a omen of impending death. Ravens have resided in the Tower of London for centuries, English myth and legend states that the Kingdom of England will fall if the ravens are removed from the tower. Ravens in dreams are bad, they represent betrayal,disharmony and misfortune.

The spiritual meaning of ravens depending on where you look could show that magical forces are presenting them self to you. Ravens are highly intelligent and good at puzzle solving, they collect shiny objects as if they were their divination tools. They learn quickly and can hold a grudge. With wings black as night ravens could be coming to you with a message or a warning, a blessing or a curse.  Dr. Carl Jung deemed raven symbolism to represent the shadow self, or the dark side of the psyche…  What about the ravens on Black Mountain island? I suppose you will just have to wait and see if they are friend or foe.