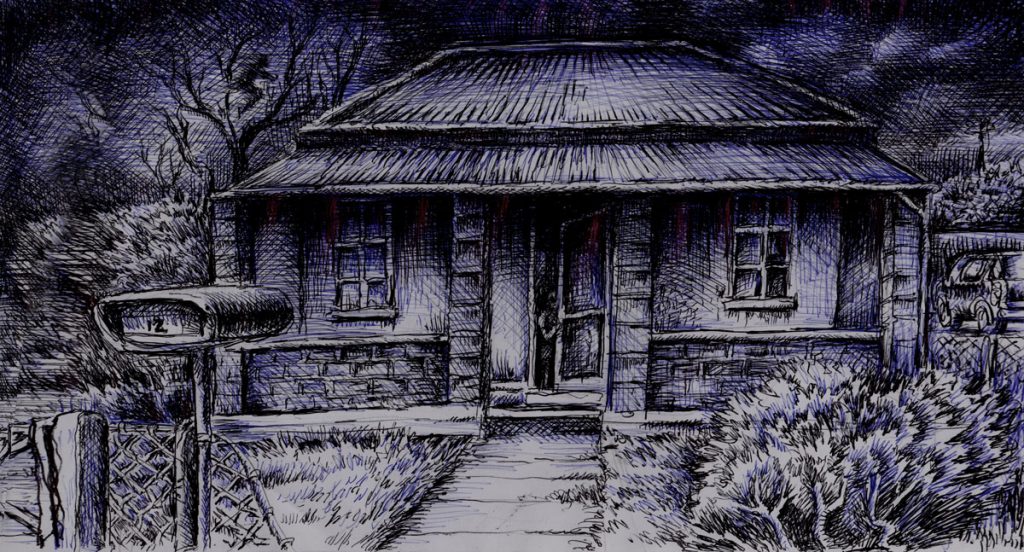 Black Mountain has its fair share of haunted buildings and items but what most people won’t realize is that most of my stories are inspired by my own experiences and that of my family and friends. While most will perceive these things as fiction I write off experience and fact.

When I was growing up we lived in an old house that was situated across from a railway line, the house was old and big, with three rooms on either side of a long passageway. At the end of the passageway was a door to the back of the house where the kitchen, bathroom and toilet was situated. I can remember at night before my mother went to bed she would lock to the door leading into the back of the house. I have five siblings consisting of four sisters and a brother. We were all in our own bedrooms one night and my mom had just locked up and gone to bed. I remember hearing the door knob rattling so I got out of my bed, I must have been about ten years old. I peeped out of my door and looked down the passageway, the doorknob was rattling as if someone was trying to get in. I ran to my mom and dad and told them to which they went to investigate. They found nothing and told me to go back to bed, one thing I didn’t think about at that time was that my mom always left the passage light on at night. And when it fused or the bulb burst it was immediately replaced. That was my first encounter with the supernatural and it would be the first of many…

The second time was when my brother and I were playing “Ninja Hide and Seek.” We would dress in black clothing and wait until nightfall, we would then go outside and hide in the darkness. On this particular evening a few of the neighbourhood kids were playing with us and I was the one doing the seeking. We had a massive avocado tree on the side of the house and I had already found three others so decided to investigate the tree. I watched as the tree shook as someone jumped from the roof into it, my brother was going to be the only one to do something that daring so I quickly ran up to the tree. I could see the black figure in the tree, I even saw the branch sway as it moved a branch higher. As I began to climb the tree I heard my brother call me, he was not in the tree but actually lying against the wall in the darkness. I looked up and there was nothing in the tree. My brother saw exactly what I did, that was the last time I played “Ninja Hide and Seek.”

Another occasion was hearing someone walk down the passageway at night but they would drag their one foot, my mom on many incidents would wake to find something in her room or sitting at the edge of her bed. As if a warning of some kind. Then not long after the phone would ring and the news would be that someone had died. My mom in my later years told me about so many of her experiences that all of you will have the pleasure of experiencing within the Black Mountain universe.

I asked my mom a few days back what she most remembered from our old house.

She told me that while they were moving in, the previous owners warned my parents that a woman could be seen on most nights in the back of the house and she had scared them on many occasions. My parents thought it was nothing more that sour grapes, as they had to move out of the home so they were trying to scare them… Clearly they were warning them.

She recalled experiencing the exact same thing I did, one night after cleaning up she made her way through from the kitchen to the passageway. She shut the door and while walking up the passageway the doorknob rattled, she turned as it rattled again. The door swung open as she was walking towards it, my mom turned and ran to her bedroom. The next day she found the key for the door and from then on out the door was locked at night. When it came to the passage light she explained that if it was off she would hear all kinds of things walking up and down it. She never told us as children because she did not want to scare us. My dad worked for the railway and when he came home from work he used to rest his cap on a railing by the door and every morning it would be on the floor. The smaller things like that once all connected together paint a much more sinister picture.

One story that got me was when my sister Antoinette cried as a child because she kept saying strings were coming out of the ceiling and trying to eat her dolls hair.

My eldest sister awoke one night with a tall dark figure standing over her, she described it as having some kind of turban on its head but the turban was pointy. She screamed as she felt she could not breath and to this day insists it was choking her. Some people will quickly say oh it’s nothing more than sleep paralysis but she had actual marks on her neck by the time my parents ran into the room. Was it the sheets that possibly made the marks as she struggled to get away from something she was dreaming off? This is what most would say, or that she was suffering from sleep paralysis.

Another sister while heavily pregnant was lying on her bed in her room and was dozing off when she awoke to find her wardrobe door ajar, she thought she was imaging things when a pair of red eyes peered at her from within. That was more than twenty-one years ago and she still speaks of how its eyes looked like two burning pieces of coal. The same sister one night awoke to find her blankets had been pulled off of her bed, she looked under the bed to find a tiny film of dust had not been disturbed except for where the blanket was pulled under.

12th Avenue was my childhood home with many wonderful memories but looking back the supernatural occurrences were plentiful. Another thing is the haunting of homes and even objects is one thing but most of the time it’s actually the people themselves that are being haunted. But this we will reflect on another time….

Remember… sometimes it’s best not to investigate those things that go bump in the night.